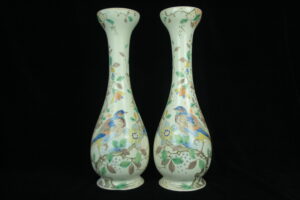 In excellent condition. One vase has had a professional restauration by the highly regarded Noor Camstra.

Hartgring developed his own style in decors based on the earlier P decors: the so-called NP (New Porcelain) with the well-known matte bird (MV) and matte flowers (MB) decors around 1910. The Japanese influence that is characteristic of Hartgring comes to the fore in these sets.
In 1917 Hartgring left Zuid-Holland and took up a similar position at the Arnhemsche Fayencefabriek. Before coming to the Plateelbakkerij Zuid-Holland in Gouda, Hartgring worked from 1888 to 1907 as a painter/designer at NV Haagsche Plateelfabriek Rozenburg, world famous for it’s Art Nouveau egg-shell porcelain.