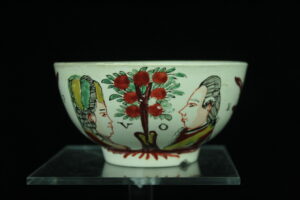 A creamware bowl, polychrome, decorated with the Orangist inscription:  'Siet wat hier van agteren staat' (translation: See what it says at the backsite). On the bottom: 'Bid voor u vorst wenst hem geen kwaad' (translation: Pray for your prince, wish him no harm).

The creamware bowl was manufactured in Staffordshire (Leeds or Liverpool, England) for the Dutch market, and painted by hand after arrival in Holland.