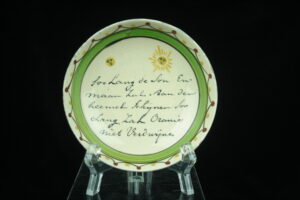 A 'creamware' dish, polychrome, decorated with the Orangist inscription: ‘Soo lang de son en maan zal aan den heemel schijnen soo lang zal Oranie niet verdwijne' (Translation: As long as the sun and moon will shine in the sky, as long will Orange not disappear).
The creamware dish was manufactured in Staffordshire (Leeds or Liverpool, England) for the Dutch market, and painted by hand after arrival in Holland.